The School of Art and Open Studio of Perquin/ Walls of Hope is an international art and human rights project of art, education, conflict resolution, crime prevention, diplomacy building, community development and preservation of historic memory.

In March of 2005, Claudia Bernardi in collaboration with the community of Perquin, El Salvador, created The School of Art/ Open Studio of Perquin. This unique art/ art education and community based project is designed to facilitate, implement and teach art to children, youth and adults.

Walls of Hope bridges art and community-based projects beyond El Salvador. “The Perquin Model”, a blue print of replicable art projects, has been implanted successfully in other regions of El Salvador (Arambala, Segundo Montes, Cacaopera, Torola) as well as in Toronto, Canada; in Huhuetenango, Rabinal, Cobán, Guatemala City, Guatemala and, in Cocorná, Antioquia, Colombia and most recently in Alta Verapaz, where Mayan Q’ekchi’ survivors of the massacre of Panzos, Guatemala 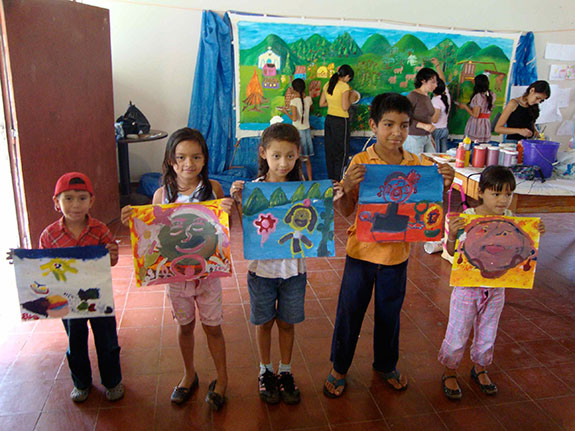 The School of Art and Open Studio of Perquin has established its ongoing presence in the community through the creation of public art projects, murals, urban interventions and weekly classes and workshops in painting, drawing, wood sculpture, textile art, printmaking and mask making. International artists come to Perquin to share with the community their skills and artistry producing week -long workshops designed to teach and disseminate techniques, skills and aesthetic propositions to be implemented in community based projects.

The Perquin Model could be defined as follows: 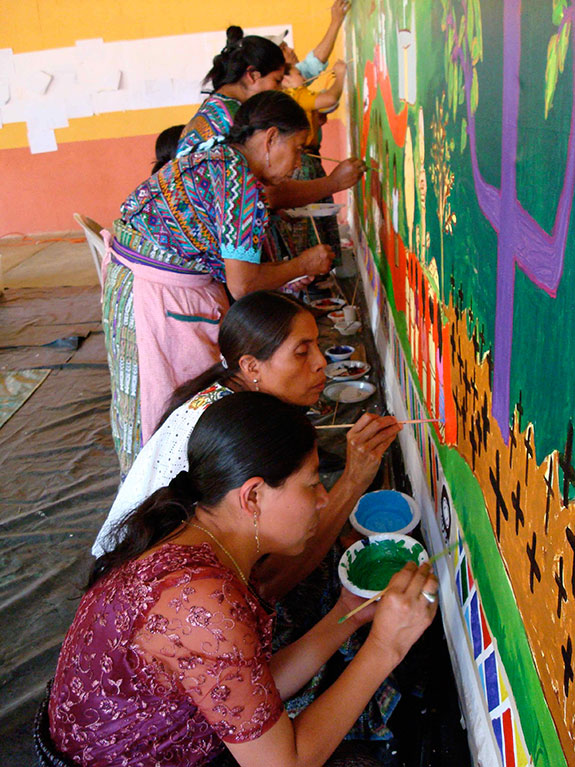 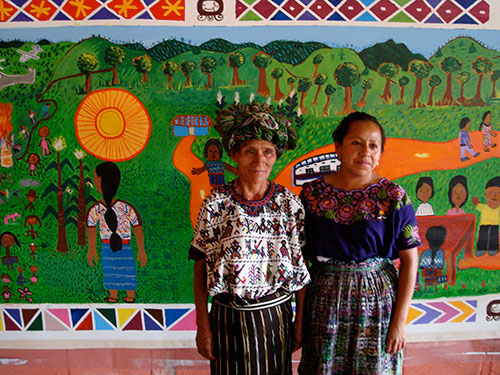 The community art projects created in the Perquin Model focus on the challenges posed by inter-communal and societal conflicts in today’s world. Our vision is to bring greater awareness through shared town meetings, through the planning of collaborative art interventions and public art pieces. The collaborative art projects recover historic memory while providing artistic skills and practical expertise in a new model of art education.

The mandate of our school is to create bridges of collaboration with local and political agencies that will welcome art as a contribution of the social planning, to develop leadership roles among the participants, specially the youth who will face the challenge to grow up in a collapsed economic scenario, threatened by poverty and unemployment. Through art and creative praxis, children and youth focus on conflict resolution envisioning a proposition for endurable peace. 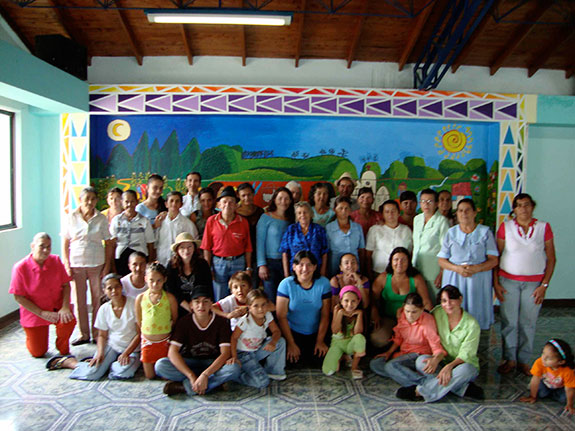 “Peace is a constant activity of diversity. Peace is not static. Rather, it is a constant exercise of respect for people. Peace follows a trajectory: personal peace, communal peace and lastly, world peace.  If we continue to rule the world with the law of “an eye  for an eye”, we will all end up blind”

Peace is escorted by urgencies.
Art and community building are responses to those urgencies. Collaborative and community based art projects have proven to be efficient and pivotal in the preservation of Peace Process and the demand of justice.

Guatemala City, January 2008
Survivors of massacres from Ixcan and Quiche

Toronto, Canadá, April -May 2008
Youth Project with recent refugees and Youth at risk.

Rabinal, Guatemala, February 2009
Survivors of torture and survivors of the massacres of Rabinal,  Plan de Sánchez and Rio Negro

Panzós, Guatemala, June-July 2010
Survivors of the massacre of Panzos, Alta Verapaz.
This Project was possible thanks to a: NALAC, National Association of Latin American Art and Culture Transnational Cultural Remittances Grant.

The Perquin Model is regarded as a replicable project in areas of the world affected by violence, human rights violations, war and post war periods.

Within the context of the II World Congress on Psychosocial Work in the Process of Exhumations, Forced Disappearances, Justice and Truth that took place in Bogotá, Colombia, April 21-24, 2010, the role of art was examined closely. International Human Right lawyers determined that art rendered by victims of state terror, war and massacres, can and should be collected as visual evidence. Art becomes a vehicle for truth gathering, pursue of personal and collective historic memory and the demand of justice.

Brief summary of the origin of this project:

As part of the Peace Accords signed in 1992 ending twelve years of civil war in El Salvador, the United Nations Truth Commission nominated the Argentine Forensic Anthropology Team  (AFAT) to perform the exhumations of the massacre at El Mozote, Morazán. According to Rufina Amaya Márquez, sole survivor of the massacre, the Salvadoran army murdered more than 1000 civilians on December 11th, 1981.

Accompanying AFAT, my task was to create the archeological maps that would record the location and finding of human remains, associated objects and the presence of ballistic evidence.

After three months of investigation, the allegation of mass murder against civilian population was confirmed. Inside a small building known as “The Convent”, Site #1, from a total of 9 archeological sites marked within the hamlet, AFAT was able to identify the presence of 143 individuals, 136 of whom were children under the age of 12, with an average of six years of age. Many of the victims were infants at the time of death.

Once my assignment as consultant/ artist in the case of the investigation of the massacre at El Mozote concluded, I went to Perquin, a village of 5,000 inhabitants located 4 km. North from where the hamlet of El Mozote once existed.

Perquin, as most of the communities in Morazán, the most North/ Eastern area of El Salvador, had been hugely impacted by the war. The people living there in 1992 were ex combatants or civilians who had recently returned from the refugee camp of Colomoncagua in Honduras. The majority of the existent houses were inhabitable for they had been bombarded or shot at so severely that no one could find shelter inside them.

I looked around amazed at the effects of destruction. I was surrounded with evidence of pain contained on the wounded walls.

They were walls of pain.

Since 1992 until 2005, I visited Perquin frequently, attending to several aspects of the development of the pending case of El Mozote. Exhumations were not allowed to continue until 2000 when the case was re-opened and the AFAT was permitted to investigate the massacre places of La Joya, Jocote Amarillo, Cerro Pando, Rancherías and Los Toriles.

It was during those visits to Morazán and to Perquin that I learned about the history of violence inflicted to civilian population during the 12 years civil war. People spoke of forced displacements, of families suffering the death of many members and the loss of their crops. They felt overwhelmed by tragedy and frighten for not remembering enough. Their lives had been so fragile and their existence so fugitive that they wondered how one could retain “historic memory”.

As an artist, I think and I remember in the visual form.

I suggested that the historic memory of the people of Morazán could, perhaps, be retained through creating collaborative and community based art workshops.

On March 8th, 2001, International Women’s Day, a group of 35 women, ages 25 to 80, gathered at CEBES (Ecclesiastic Base Communities of El Salvador/ Comunidades Eclesiásticas de Base de El Salvador). These women, leaders of their communities, asked me to organize a workshop for they wanted to remember, while drawing, what had happened to them during the war.

“El Cantón de Mi Cuerpo”/ The Hamlet of My Body” was a response to their demand. The final life size paintings and drawings, which traced the silhouettes of the participating women, were narrative visual investigations that captured the accumulated and retained memories within the body. In a mapping of their existence the women rendered all the stages of their life from birth to motherhood, the loss of beloved relatives during the war, the physical pain, the amputation of both, limbs and hopes. They were able to locate the portions of their bodies where strength still was kept undamaged and where dreams and trust nested.

The path towards Walls of Hope was initiated.

The School of Art School and Open Studio of Perquin, El Salvador.

The creation of the School of Art and Open Studio of Perquin responds to the following question:

“How can the insertion of art be constant in the life of a community?”

In responding, I propose to examine the intersection of Politics, Ethics and Aesthetics, coexisting, searching for memories and trying to incorporate genocide as a tangible reality of the country’s recent past and present.

It is in the awareness of a mutilated history where the insertion of art becomes not only a contribution but also a diplomatic tool of construction of a different reality.

It is not a re-construction. That which was destroyed cannot exist again.

The proposal of community building implies the creation of a reality that has not previously existed. In this newness, perhaps, is where the kernel of life resides.

How could genocide happen? What are the implications of the past in the frail present and the unimaginable future?

“Art” and “Genocide” belong to fundamental opposite paradigms.

Genocide (geno, Greek: “origin”/ cide Latin: “destruction”) is the purposeful and effective praxis of destruction. It is annihilation in its most successful form.

Art means generating from nothingness. Art exists through the conviction, action and determination of the maker/s. Art is a tender caress of remembrance, loss, pain and hope, finding in the proposition of beauty its vindication. Art may not mean, necessarily, an improvement of a catastrophe but art will assist in the recovery of the suffering endured, which will be birthed as a communal proposition.