From July 11 to July 15, 2022, twelve participants, ages 4 to 48 participated in the development, designing and painting of a community-based and collaborative mural project involving families of victims, and those directly affected by MMIWM2.

In 2016, I was invited by Judge Abby Abinanti to work in the creation of a community-based mural. That was the first time that I learned about the recurrency of missing Indigenous persons and about the personal and communal crisis that this tragedy imposes on families and communities. The most current mural completed on July 15, 2022, narrates a history of beauty and sorrow which starts centuries ago under the cruelty and crimes imposed by colonialism, as well as the frustrations, sadness and doubts that the Yurok Tribe shares when addressing Missing and Murdered Indigenous People.

As a community-based artist my way of working in the creation of a collaborative mural with members of a community is asking questions that may serve to generate a thread of intention, a possible composition, a visual narration that will define the intention of the participating artists.

The mural created in Klamath in July of 2022 is a remarkable piece of art, a multi-layered depiction of a tragic reality of silenced voices.

The mural is surrounded on its very top and bottom by a decorative border that represents the identity of the Yurok Tribe. Immediately bellow the decorated borders there are six crescent moons hugged by an intensely, purplish, blueish ultramarine background that opens the universe to a central full moon that is bleeding, quietly, intentionally, relentlessly. The moon speaks.

Within the geography of the mural, from left to right, there is a landscape of high, monumental trees, soundless witnesses of a reality of pain that affect a long line of people, silhouettes that march surrounded by a cobalt-blue night, from the present to the past, from today to always, from now to ever. These noiseless men, women, children, elders, and youth, have a red hand covering their mouths. They are impeded to talk; they have been silenced by force. They are not speechless. The red hands are showing solidarity and resistance.

Butterflies and a rabbit move to the center of the mural where a person, not distinguishable as a man or a woman, ageless, with long dark hair meets the Klamath River that transits from left to right, becoming a river of blood and tears extending to the extreme right of the painting.

Crowning the head of the person who gives her/his/ their back to us, there is a ritual fire that congregates three people who are convoking two spirited women, ancestors and guidance.

A Yurok woman is kept beyond reach within a barred heart. A younger female appears behind the older woman, whispering a message. Because of her beautiful smile, one hopes that this young woman will remain happy and safe. Six multi-colored silhouettes are simultaneously dependent from the heart as they support the heart and the two women inside its perimeter.

Two trees weeping tears of blood escort a young woman with eyes closed. It is not possible to discern whether the young woman wishes not to see, or if she is looking within herself, into her own map of existence, into the knowledge that she has received from her elders, searching for her ancestral wisdom. A red hand covers her words, her whispers, her voice. Underneath the trees, coming from behind them, there are two open veins of sorrow meandering from the back of the landscape, moving along the green meadows until they become part of the river of blood.

Two couples are trying to communicate, to talk and to listen to one another. Speaking and hearing with empathy and patience may be the germinal seed towards a perdurable change based on understanding and trusting one another. A blue ultramarine sky becomes an agile cerulean atmosphere that allows the mural to breath, to palpitate as a heart that will remain alive even after harm. This is an insistent sky of possibilities and hope.

In early October 2022, the mural traveled and was exhibited in Arcata during the Northern California Tribal Policy Summit/ Missing and Murdered Indigenous People, honoring California’s First People Stand in Solidarity for Justice, and Change.

I am humbled, thankful, and deeply moved by having had the opportunity to accompany the creation of this transformative, inspiring, truthful mural. I trust that the mural will continue to travel and to be exhibited sharing the historic memory of the Yurok Tribe. 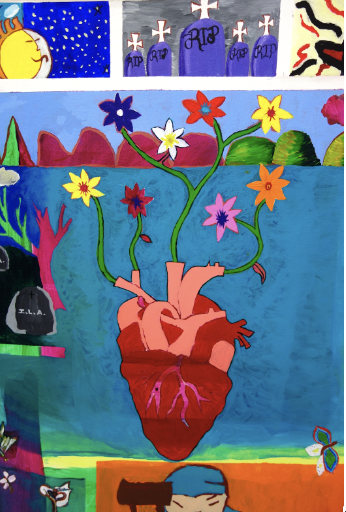 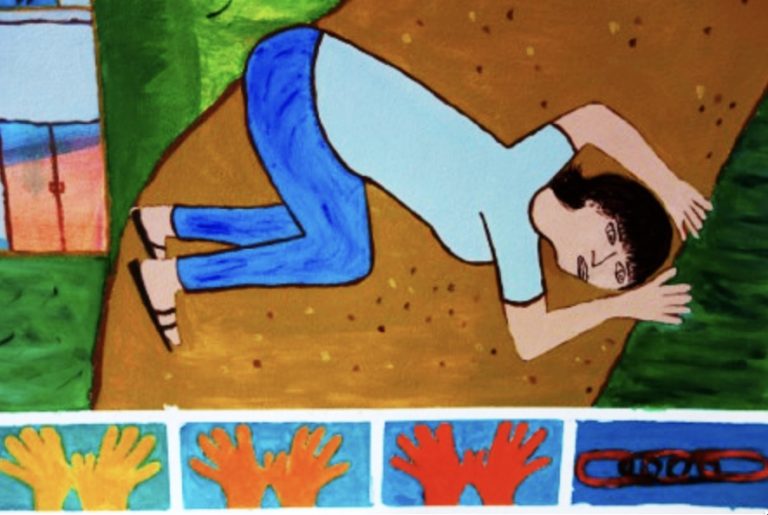 Collaborative and community-based project with relatives of victims of recent cases of police brutality in Argentina. The Museum…

I was in the Bay Area teaching at the California College of the Arts in January 2020. The… 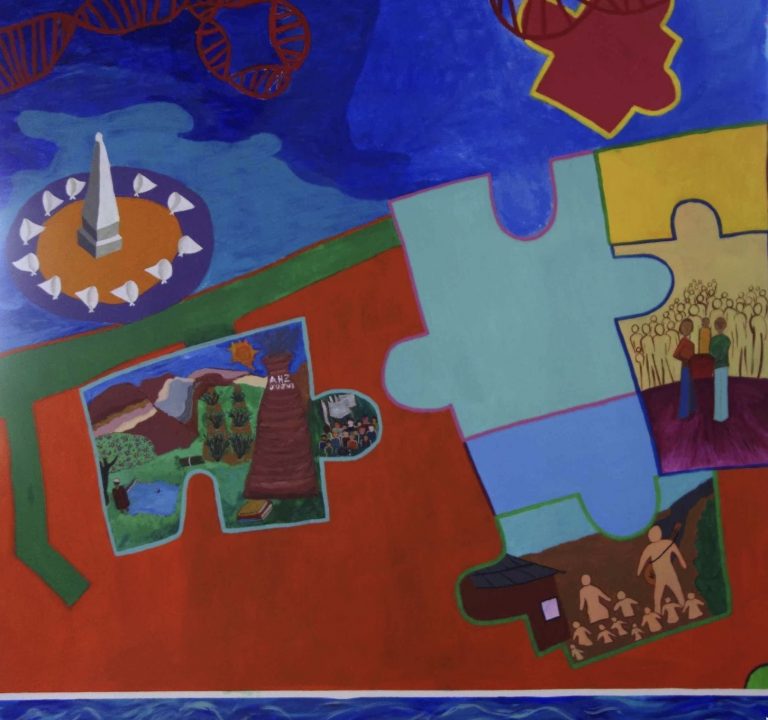